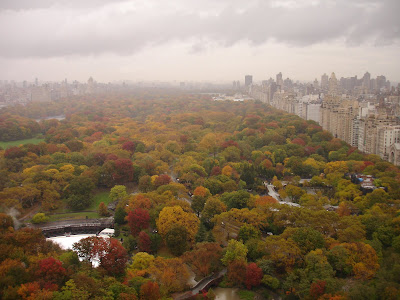 This is long looooong overdue...I have been buried in writing and other stuff. I read Sara Zarr's blog about it because I wanted to remember what she said, and it took me five minutes of previous, previous, previous...to find it.
That makes it pretty clear how belated all this is. But here goes, anyway. The NBA experience was wonderful.
First there was a floaty plane ride, during which I tried not to grin at every stranger who happened to glance at me. Then there was the amazing hotel. It rained off and on the whole time, the light shifting and changing the amazing view of the park. Then came a truly fabulous teen "press conference" with 250 or so NYC teens gathered to listen to the YA finalists read and ask us questions. And the finale was a black tie dinner, amazing speeches, amazing writers. (Amazing seems to be the best word for all of this.) Fran Liebowitz and I chatted on our way to the bathroom, for about a minute, but still, it was an amazing little minute... Joan Didion received a lifetime achievement award. Her writing, her exploration of the Santa Ana winds in southern CA, was ringing in my head a few weeks earlier when the fires were raging all around (and through) my little town.
One of the best things about the whole experience was the chance to meet the other writers. Brian Selznick is a friend and I get to see him now and then along the author-trail, but I had never met Sara, Sindy or Sherman. (the three s's) All three impressed me for different reasons. Sara and Sindy are both strong, interesting, very smart women. Sherman was a delight. He settled a little kerfluffle with style and grace at the reading that included all the adult authors. We sat in the front row, in order of appearance, left to right. It began with a remark by Robert Hass , who sat on my right, about the tragedy of the war in Iraq. Christopher Hitchens , with his politcally metamorphic background, was up next . He blasted Robert, and then the audience, for not supporting our forces in a fight he felt they were beginning to win. He was, ah, provocative. People began to hiss and, finally, boo quietly. Hitchens ended the remarks and slid into his reading in a way that settled the room, more or less. Sherman Alexie, followed him and opened by reminding us, in just a few words, that opposing views can be held in the mind, heard, considered. Then he began reading and the room felt whole again. Sara Zarr blogged it nicely, back nearly two months ago when it should have been blogged.
For me, coming home, going back to work, has been wonderful. The major joy of having been given that silver medal for such an important literary award is simply this: I feel more able to write well. Silly maybe, but there is it. My belief in my ability has been upped. I am ever-grateful to the National Book Foundation and will will try to hang onto that.
Posted by kathleen duey at 2:44 PM 4 comments: