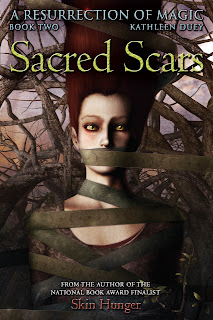 
I just received the first review of SACRED SCARS, from Kirkus, and it’s lovely:
(I am editing out some spoiler-ish things...)


“Thrumming with dense, meaningful tension from first page to last, this middle installment in the Resurrection of Magic trilogy follows the two plotlines established in the first volume, Skin Hunger (2007), through despair, oppression and rare moments of hope. Sadima’s thread begins in the caves, where she’s repeatedly hand-copying sociopathic Somiss’s research on ancient magic and (ostensibly) teaching caged boys to write. The second thread, interwoven, follows Hahp through indeterminate years in the caves, in an epoch far later than Sadima’s early section but possibly matching the end of her later one. The text so successfully portrays Hahp’s experience in this grueling, cold-blooded wizard “academy”—isolation, starvation, abuse and constant, unsolvable puzzles—that readers may absorb his strain, confusion and desolation themselves. A single detail implies that Sadima’s thread will converge with Hahp’s in a heartbreaking way, but it could be a red herring. Absorbing and unwaveringly suspenseful.”

New review of the first book in the trilogy, SKIN HUNGER
http://bit.ly/118sUx
Posted by kathleen duey at 12:42 PM 32 comments: