I am adding this in Feb. 2013. Everything below is all still true, except that the experiment has become a novel in progress. I expect to finish it before 2014.


The blog below was written early in the experiment. By the time I stopped writing in tweets, there were three thousand people reading Russet.  (((I had to set it aside to write work that was already scheduled by my publishers, including my trilogy:  A Resurrection of Magic is in production now (yay)   http://kathleenduey.blogspot.com/2012/11/i-think-we-all-know-what-this-means-no.html

Thanks so much to everyone who has been in touch. I hoped the novel would work. I never expected what it has become. Instead of writing back to everyone, here are the answers to some of your questions:

1. I don't know how long Russet will be. The train feels like the first segment to me. No, it is not close to being finished. It is just getting started, I think.

2. I don't know it if will ever be published. I am not thinking about that at all now.

3. I think it might make an interesting film, too. What is finished would be the first act.

4. Yes, there is a Coast Starlight train, I have traveled this route many times. I love long train rides.

5. Where did the idea for doing a twitter novel come from? I talked about it here.

6. What was the inspiration for the story itself? I met a woman on a plane once, who was very clearly not who she said she was...I had lived in the city she claimed to be from, and I could tell she had never been there. Then I overheard her talking to someone else in the terminal, using a distinctly different voice and accent. So that was probably the spark.

7. Yes. I have written many normal books. You can find information on them here, just scroll down a bit.

8. Today, there are about 23 typed pages of tweets. Because of the compression, it feels like about 100 pages of novel to me.

9. I have to fit it in around my published work, and my travels. So sometimes there are lags of a week or so. I apologize. Sometimes I add material every day.

Thanks again!
kathleen
Posted by kathleen duey at 7:29 AM 2 comments:

Email ThisBlogThis!Share to TwitterShare to FacebookShare to Pinterest
Labels: men with one wing, Russet, trains, twitternovel 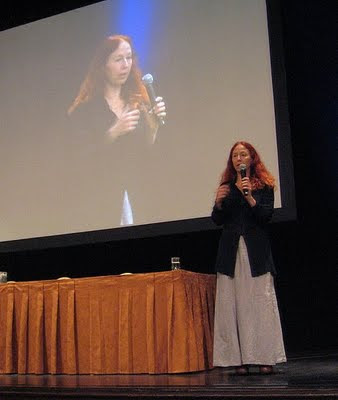 SCBWI .... If I didn't have a deadline banshee-big-freight-training its way toward me I would write more. The basics: SCBWI only gets better, smarter, bigger and more important. If you want to write for young readers k-YA, there is nowhere like SCBWI.org to get a start.

And as a plus, in that amazing Hollywood hotel, I always meet someone outside the conference group. My last morning, it was a pair of producers, sitting two feet away, agonizing about the cost of getting the crew and cast to Italy to film scenes with restored/replica 14th century ships--but all the people and all the equipment was in Prague. But if they filmed with minimal crew, the effects after-production costs would soar...And they had five days to figure it out. We chatted a little .One of them asked me, as a novelist, if I know the ending before I start, like screen writers almost always do. I told him..no. He said I was brave. Uh, no. Just disorganized?

Photo by Debbie Ridpath Ohi, with permission, and thanks!!
Posted by kathleen duey at 10:09 AM 8 comments: