A Resurrection of Magic #3 (still untitled) : Atheneum Books: 2011
Sadima and Hahp are trying to survive what they have caused. It seems impossible that either one can live, never mind both. But maybe. If they can get help.

Read now, online: Russet
Russet is running from his father, from the man with one wing, from his own crazy past: http://russet-one-wing.blogspot.com/

A Virgin’s Blood
A desperate girl lives in a slum, a favella that is growing daily as refugees pour in. She won't tell me her name, but I know she is planning on selling her blood.  I have met the old man who will drink it, and I have seen his stone house, near the river. There are rooms without windows.

Free Rat
Small is in the dome in the desert. The world is falling apart beyond the white walls. He has almost figured out how to escape. Almost.

B.
B. hates the name her parents came up with: Berendina Pumpernickle. She is in the grocery store with her mother, hoping no one from school sees her, that her mother doesn’t do something silly, and that no one ever finds out how weird her family really is... 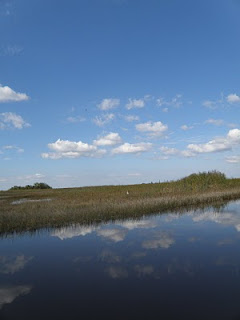 This is the Everglades. A tiny little portion of them, I mean. I was in Miami for a writers' conference and was treated to an airboat ride. Somehow I never knew the Everglades is a river. There is a steady, slow, slow current. So many interesting residents there. Birds, turtles, and the alligators (the guide said) have survived two ice ages. They have brains the size of a peanut. So really, what is my excuse? This big glop of stuff between my own ears and just a puny little economic recession to make it through?

I will be back in FL in June, then again in October for The Miami Bookfair.

. click the photo to enlarge it...there are clouds in the water and an egret in the grass. I think it's a grackle, flying away, away, away....

Posted by kathleen duey at 9:52 PM No comments: