Back from ALA, back to work 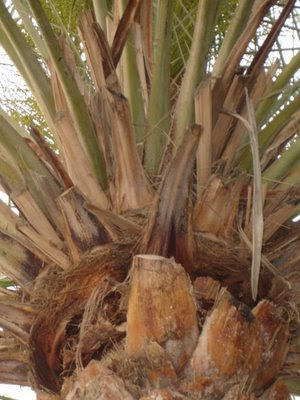 My camera died. So this picture was taken in the Emirates, but it is the same variety of palm that lines the walkways of the Anaheim Convention Center where ALA was held this year. They are 40 or 50 feet tall and truly magnificent.
.
I saw lots of friends. LOTS. I love writers--they are generous and kind and funny: All good things. My signing was great and encouraging--a lot of people came up to me with kind words about my books, and I feel very ready to get back to work on Sacred Scars. Before I went I was wussing out on a tough scene. I can write it now, I am sure.

The Newbery/Caldecott acceptance speeches were incredible, just-flat-out, goosebumps great. I am so glad I went. I wasn't going to, but Ellen Hopkins had an extra ticket, so last minute, I did. Thanks Ellen!!
ALA rocks. Librarians will save the world if we just fund them well and get out of their way.
Posted by kathleen duey at 6:25 PM No comments:

Fern and Me, we talk 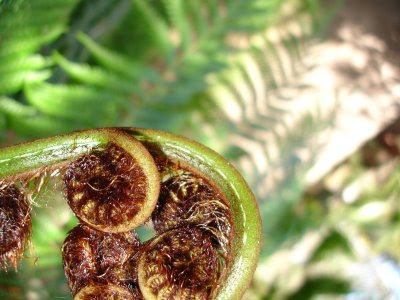 Australian tree fern fronds un-spiral themselves to become lacy, lovely, arching 5-6 feet long. This one is just outside my office door.

We discuss characters, plot points, all sorts of things. Jux is trying to get himself killed and I can't bear to lose him. Fern says I should relax and trust the little street kid. I am trying.

Tomorrow is the day, 6 years ago, that my son Seth died. He was twenty-five. I still cry every day. I can now weed the garden or do the laundry while I cry; you learn what you have to learn. But I would do anything to bring him back, to let him have the rest of his life.
Anything.
Posted by kathleen duey at 1:46 PM 12 comments: 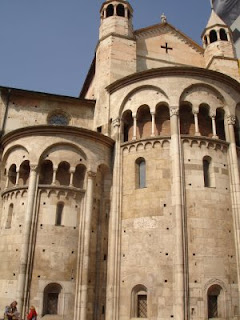 The deal with S&S Aladdin just closed. I will soon be writing the four book set: The Faeries Promise. It's set in the same place as The Unicorn's Secret, an eight book set, also from Aladdin.
Lord Dunraven's lands were the focus of my dreams in the 3-4th grades. For about 18 months, I went to sleep here and woke up *there*. And when the stars came out there, I would fall asleep and wake up *here*. It was like having two lives. I can't wait to start.
.The picture is the North side of Lord Dunraven's castle (currently in either Bologna or Modena, Italy, my photo notes got lost.) A girl with wings is trapped there and has been for a long, long, time. She has a terrible responsibility. She didn't ask for it, and she doesn't want it. But there it is.
Posted by kathleen duey at 12:08 PM 4 comments: 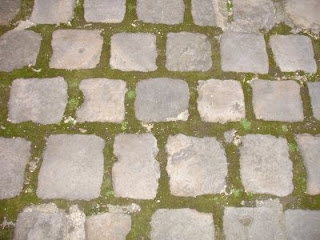 These cobbles are in Paris. I have moved them to Limori's slum South-End, a dockside squalorous place--and where Sadima is now.

The writing is flying again. The time line is resolving itself. About 200 years pass in one story and less than 10 in the other. I have been pacing a lot, considering various devices. But the every-other-chapter format is enough. I don't want devices and visible structure to upstage the characters. Not even a little. So I am going straight at it, and I think (hope, want to believe) it's working.
Posted by kathleen duey at 9:11 AM No comments: 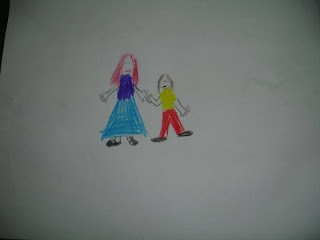 I get emails and letters from people who read my books. It's wonderful. It keeps me going. I am so grateful. Some of them say things like, "I am such a fan " or, from the youngest readers, "I'm your biggest fan!!!!!!!!". (Current record number of exclamation points 62). Sometimes people send me stories they have written using my characters. Sometimes I get wonderful artwork.
.
This morning there were more missives than usual, and it set me wondering. Mr. Google, Ms. Firefox and friends, always eager to help me avoid real work, led to this:
There are two proposed etymologies, which seem to me like phases in the same process.
1. Fan is a shortened form of "fanatic". Fanatic, in 16th century England, meant "insane person". The Latin root word is fanaticus, which also meant "insane person" but adds the nuance of "divinely inspired". Similarly rooted words meant "sacred place" or "temple" Somewhere around 1647 'fanatic', the adjective, began to mean "extremely zealous" and a few years later, it slipped into noun-hood.
2. The word "fancy" was used in 19th century England to describe a longing or wish. Then it was used to describe boxing enthusiasts. The first shortened form was "fance", then, later, "fan"--both words born to describe boxing enthusiasts. Since most boxing enthusiasts then were very, very enthused, the word fan was later transferred to people who were excitedly devoted to other things.
and now, off to write about a fanatic...
Posted by kathleen duey at 9:51 AM No comments: 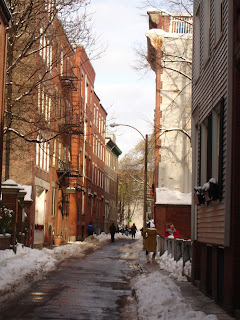 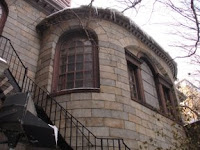 .
.
.
.
.
.
.
.
.
.
.
.Limori, once you are up the hill from the docks, out of South -End's squalor and jumble, is a city of wood and brick. Beyond that, Ferrin Hill has estates, massive homes of quarried stone, built, like castles, to last generations. I realized this morning that I pictured the neighborhoods around Market Square like some of the older ones in Boston-a city I have visited only three times.
Writing about book-building here has made me notice where things come from, how I paste realities together to form a tangible fantasy, while I think I am just following the characters around. The Eridians have basis in fact, too. Writing all those middle grade historical novels left me with piles and e-piles of research, all of which include great stories I couldn't use at the time. America has a long history of cultural experiments.
Posted by kathleen duey at 7:08 AM 2 comments:

Alamo, in Spanish, means "cottonwood tree". The Omaha tribes named them maa-zho. Lakota call them canyáh'u, which means "peeling off the bark". Alamo, in Texan, means, "never give in" which is far different than "never give up." The Alamo, which was moved to San Antonio, is associated with death--brave, stubborn, glorified death.

But the cottonwood tree meant life on the great plains in the millennia before wells and dams. If you see them at a distance, you know you won't be thirsty long. They line up along creeks and rivers. They put little white mary-poppins umbrellas/flotation devices on their seeds so their children can root downstream. I have had two close cottonwood friends. One was scared and scarred by a fire in Grand Junction, Colorado. The other one still holds a rope swing across Clear Creek, in Golden Colorado.
Posted by kathleen duey at 8:47 AM 2 comments: 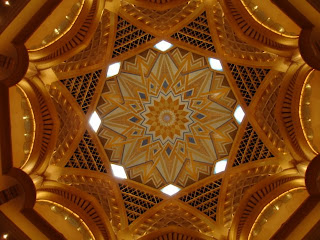 This is a ceiling, a dome that is part of a hotel lobby in Abu Dhabi, a hotel built, in part, to receive royal visitors. I took the shot straight up, bending backward to try to get the kaleidoscope effect that was so amazing standing beneath it. The curved balconies are really balconies and the gold is really gold.

This dome found its way into Sacred Scars yesterday. It is now part of the palace in Limori, part of the king's library. The arrangement of the books is designed not for ease of use, but for difficulty. Knowledge is power there. And power, in that world, it not shared. Nor in ours, sadly. Not often enough. 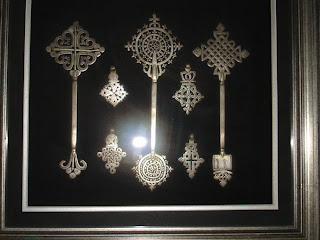 These keys are part of collection belonging to a wonderful school principal in Abu Dhabi. I stayed with her for a week--it is an astounding and interesting city. The big key on the left is the key to the cage in Sacred Scars. The other two are tucked in Sadima's bodice as she runs. I have no idea what they open yet. I don't think Somiss knows, either...
Posted by kathleen duey at 9:11 AM 10 comments:

BEA (book expo america) Independent booksellers are to literacy what water is to gardens. 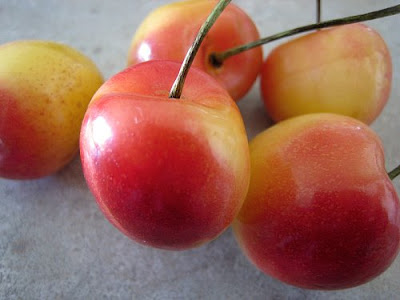 Just got back from BEA. Thanks to everyone who stood in line so long at the signing. All the kind things you said about Skin Hunger will make Sacred Scars better.

I love BEA because I love being around book-people. Independent booksellers are to literacy what water is to gardens. There's a state by state list of children's bookstores--and bigger stores with great children's departments--on my website: wonderful bookstores. If you know a great, community-active store that I have missed let me know, please, and I will add it.

Peripheral Amazing moments:
1. The shuttle bus driver was Mayan, a life-long student of his people's history, both written and oral.
2. The Grand Central Market had Queen Ann cherries for 69 cents a pound.
2.a. I can eat 1 1/2 pounds of cherries in one night.
3. The Pharmacy at third and Broadway had hundreds of magic oils, labeled for intent and purpose: Curative; I will destroy you; strengthen love; bring gold/wealth; ambition restored; protection; etc. There was an altar with a skeleton wearing a red cape and somber-eyed patrons sitting beside it. The counter guy recited a roster of Catholic saints, then told me their names in three other languages, one of them African. He kept saying, "They are the same. All the same, all over the world, the same with different names. You can ask them for help." I sort of knew about this amalgam of religions mixed with early/primative (or new age, take your pick) belief that focusing thought and ritual can change the facts, but it was amazing to see. We all do it, one way or another, when life thwacks us hard enough...I was looking for chapstick. I found a book spark.
4. Universal Studio's backlot burned. The areal shots were astounding. The MTV awards were not delayed, the theme park never closed, the show must go on.
5. Mine, too. Back to work...