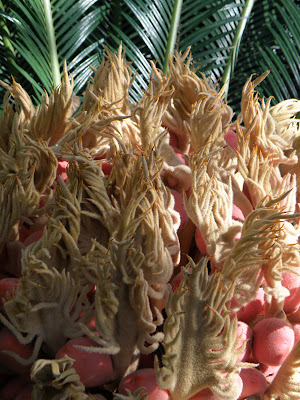 I have sago palms--apparently both males. Because I have never seen anything like this one before. She lives in the gardens around the Alamo. Isn't she a beauty....in an odd, creature-from-the-Pleistocene kind of way.
Posted by kathleen duey at 8:16 PM No comments:

For a long time, I have made a point of talking to cab drivers. I jot notes, or sometimes, now, I record them. The conversations are one person's take on whatever comes up. They don’t represent whole countries, accuracy, or the ultimate truth about anything.


In San Antonio, TX, at NCTE last week: A cab driver from Sudan told me he wishes people understood how big Sudan is, and that in many areas, things are all right, even good. He got tears in his eyes talking about Darfur, then said his brothers and a cousin are starting a building business in eastern Sudan, where he is from. He smiled and nodded in a perfect cadence, like he was listening to music I couldn't hear, while he outlined their business plan. He said they had found a good Kenyan source of building materials, cheap enough to get a good start. He has been in San Antonio for 10 years. His English and his Spanish are nearly fluent. He said there were over a hundred languages in his homeland, with most people speaking Arabic and English, at least a little. He is seriously considering going home. If he does, he says, he will figure out how to take a few years supply of Tex-Mex hot sauce. Saying that made him nod again, made him grin. He knows his brothers will like it, too...
Posted by kathleen duey at 10:29 AM 2 comments: 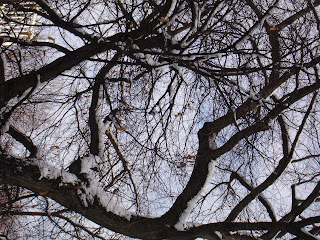 This snowy tree is in Boston, behind the oldest church in America at the foot of a hill that bears the weight of hundreds of old, old, old, slate gravestones. It is
Gloomy.
Doomy.
Bookshelves of Doom has my interview up today. I am honored.
Posted by kathleen duey at 7:55 AM No comments:

Ah, the scream of the wind, the smell of the smoke...

None of the major fires are near me.
Yet.
The worst of the Santa Ana winds are north of here, too.
So far. It's early fire season.
We name fires here, usually by the local name for their location.

For those of you with friends and relatives in California, here are two websites to add to your ready-reach pile...

There was a canyon fire in San Diego yesterday, put out before it could spread. We heart our firefighters. Mucho y siempre. 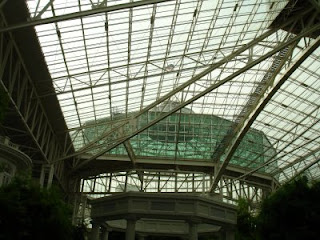 This is a self-contained, climate controlled, enclosure. It is the setting, with some alterations, for a project that is just sliding from concept to story now. So I will be writing the future, this year, sort of the future, anyway. I am really excited about this project. And the other new project, which takes time in the opposite direction--sort of the other direction, anyway.

Posted by kathleen duey at 7:52 AM No comments:

Shopping for a French-made kitchen tool, I came across this product description. It's a warning to us all that translation isn't easy...

BUY
MIU France's Professional Stainless Steel Mandoline really is the flagship posture of the Mandoline run along. Instead of the removeable blades set in other models that feature to be swapped come out to exchange cuts, the Professional Stainless Steel edition is completely sef-contained. There's no talents to slack or stay fresh caterpillar tread of, and heaviness and breadth is go down by the leisurely to habituate telephone dial on the face of the mandoline. Just same homogeneous models that betray with respect to 2 to 3 epochs as a great deal, you tin apace shift betwixt julienne vegetable, square and waffle cuts every part of according to the twitch of a lever tumbler. The consummate hand-book put up be downloaded hither: http://www.miufrance.com/images/90797Manual.pdf . This Professional0 carries a unitary yr manufacturers warrant and storage caseful. This is a unitary clip appropriate force and quantities are modified.
Posted by kathleen duey at 3:42 PM No comments:

Email ThisBlogThis!Share to TwitterShare to FacebookShare to Pinterest
Labels: translation is hard

Adults:
Happy Election Day.
Be glad, be glad that you live in a country where you have a voice.
Use it, or stop complaining.

Young People:
Happy Election Day.
Be glad, be glad that you live in a country where you have a voice.
I hope you have been paying attention to the election, that you have some opinions, that you have decided who you would vote for, if you could. When you can vote, do. Demand good government. Insist on justice for all. Keep America free.
Posted by kathleen duey at 10:17 AM 5 comments: