Russet is growing up into a real book (I think)


While I wait for editorial feedback on the last book of the Resurrection of Magic trilogy, I am working on several other projects including Dickens and Fob (not the final title)  for 5-8th graders...(See the post below this one.)

I have decided to finish Russet, too.  It's  a story for YA and adult readers I began writing  two years ago, then had to set aside to focus on the trilogy. It was an experiment, a story written in tweets and published real-time, online, no revision, and without me having any idea where it was going or where it would stop. There were 63 pages of tweets when I had to put it away in a cold file, all by itself.

Over 3000 people were reading it online.  I was completely lost in the story.
And now I am again.

I'm pulling it out of the strict twitter format, but it still moves fast and keeps me up late, just like it did the first time. I love this weird story. Here is the rewritten beginning:

I haven’t seen my father in eight years.

I thought he was dead.
He isn’t.

I turned 18 yesterday and the letter came. When the house matron handed it to me, she was smiling.  I’ve been in this group home for five years and have never gotten mail. So everyone was watching, excited for me. I took the letter, put it in my pocket, then walked out the front door to go run my usual route.

Halfway into the park, I switched paths like I always do, and then I stumbled to a stop when I saw another white envelope. A blank one. There’s five hundred dollars in it. The money is folded into thirds, like my father always folded it in his wallet.
So he knows where I am. When did he decide to fold paper money in a way I could never forget. Probably before I was born. It's possible. Shit. With my father, anything is possible.


I didn't want him to find me. Ever. I’m afraid of him. If I wasn't I’d be in bed now, back at the group home, not walking the beach at sunset, trying to decide what to do.
It’s cold, windy enough to scatter the sand a little.

I walk up to that scrabbled old mall where we used to buy used clothes twice a week. It’s still there. The Salvation Army drop-off bin has a musty old sleeping bag in it. Good enough. I can sleep anywhere.  Sand will be fine.
On the way back down to the beach, I hear someone cough. Shit. There’s a guy behind me, maybe sixty yards back? Not too close, but not too far, either. He’s walking fast, long steady strides, staying at the edge of the sand. He hurries past a lighted sign. Looks like a gym teacher or a weekend runner.
So.
Some guy is just walking the beach in a cold wind at dusk like I am?
At the exact same pace?
I decide to jog. So does he.  I run. He does, too, but I run faster and I know this beach. There are dirt paths all along the bluffs. I find a way up and hide for so long that I am sure he's gone. I am about to walk back down when my phone goes off.... 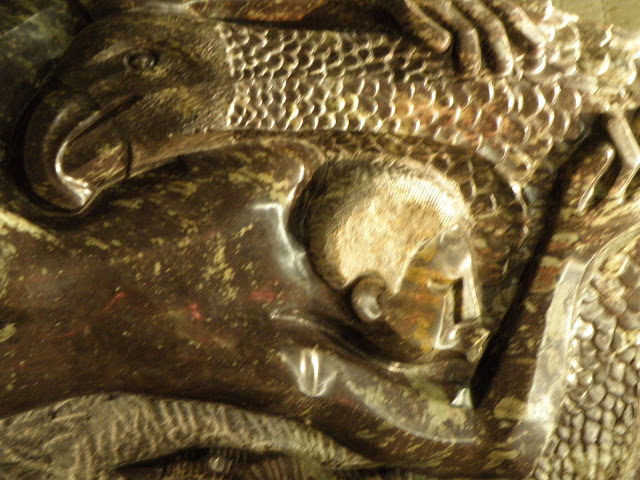 This is a photo I took in the Atlanta airport on my way to DragonCon.  The sculpture is meant to show the beginning of life, the creatures emerging, separating. If I publish Russet, and if you ever read it, you will know why this is the perfect illustration.....

Yesterday I sent a proposal and chapters to my agent. It's a cross-genre work with odd elements that fascinate me. Oh, I hope I get the chance to write this middle school series.

Dickens and Fob meet on a cold misty morning, waiting on a rotting dock, hoping to be chosen, hired  for day-work. Neither of them want mine-work or stall mucking or ditch digging. Chimney sweeping pays best ......because it is so dangerous.... 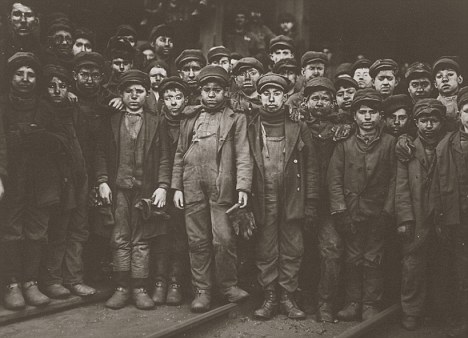 Dickens is the seventh boy from the left. He is proud of the brass buttons on his coat. They don't match. He stole them one at a time, from different shops.  Fob is the second boy from the right. He is older than he looks--early starvation stunts a lot of the street children.

The first thing I remember is a cold, muddy road.

I was small, scared and hungry, running alongside a painted carriage, crying, holding out my hand, begging for coins. I was sure that someday a pretty woman wearing a blue dress would notice me. She would stare out her polished glass window, then shout at the driver to stop the horses. When she opened the carriage door, she would burst into tears and pick me up—mud and all—because she was my mother.
I can’t remember who told me the story about mothers, but I believed it. So every night for a year I whispered to the moon, practicing what I’d say when she finally found me. Then one spring day, begging on the woods road again, I saw a dark-haired boy lean across his mother’s lap to look down at me through the glass, and I was sure he was my brother. My heart almost stopped—I ran to keep up, shouting, pleading, but no one looked back. The carriage left me behind.
So I began to wonder.
I asked a few of the other boys how they had gotten to the Old City. No one knew. No one wanted to talk about it, either, because it didn't matter. The Old City has as many orphans as it has crows and rats and there is never enough food for all of us.
Posted by kathleen duey at 8:59 AM 2 comments: